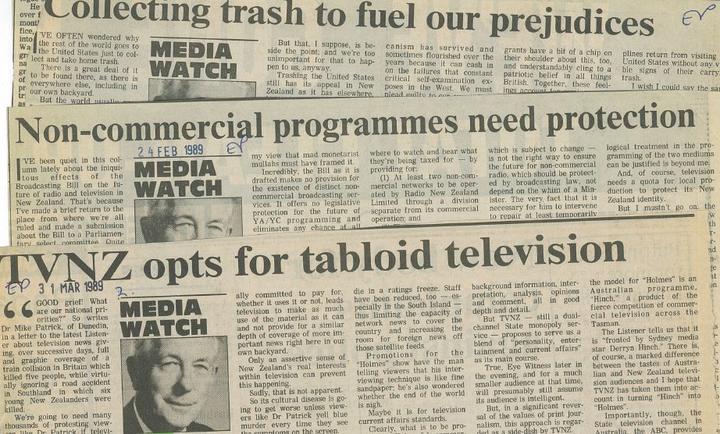 When Ian Cross was at the helm of The Listener magazine in the 1970s, it was was a hefty publication in size and weight – and cultural and political influence.

It often sold more than 200,000 copies each week – and there were only about three million of us back then.

That was partly thanks to its monopoly on TV and radio listings and the arrival of a second TV channel, but the range and vigour of its journalism was a big part of its success too during four fruitful years from 1973 when Ian Cross was the editor.

From 1975 onwards, he was often at odds with Prime Minister Robert Muldoon who reckoned The Listener leaned too far to the left. But some of his Listener colleagues also reckoned he and his editorial stances were too conservative.

Controversially, he backed sporting contact with apartheid-era South Africa, an editorial stance which “caused an uproar” Karl du Fresne recalled in the Listener this week.

“It chooses the key subject of the day . . . and sometimes gives people with opinions or a polemic view of the world scope to express themselves,” Ian Cross said in 1979, looking back on his editorship.

“I don’t care whether the strong view is from the left or of the right. I think New Zealand society needs stimulating and enlivening and we need to be more conscious of our own opinions and one way of achieving that is to be annoyed by the opinions of other people,” he said.

Tom Scott – who prospered at The Listener under Ian Cross – and also got up the nose of the Mr Muldoon – told the New Zealand Herald last week Ian Cross changed New Zealand journalism by seeking out and encouraging young journalists like himself:

“He was a very tall, very charming, very handsome midwife to a whole maternity ward of emerging talent, so his influence on New Zealand journalism via other people  — more than himself — was extraordinary.”

Stuff writer Philip Matthews said Ian Cross was “one of a handful of New Zealand editors on a mission to shape national culture and national thought” and that he made The Listener a genuinely national magazine.

“My whole editorial view was to begin from the readers, from your country’s people and express their reactions and explain them sympathetically,” he told Radio New Zealand in 1979.

“The magazine struck a chord of recognition among many people who hadn’t read it before. They felt represented by the magazine,” he said.

In 1964 Ian Cross became a regular presenter of Column Comment, the first local TV programme to critique the media (though mostly focused on newspapers).

In one edition in 1969, he criticised the newspapers for excluding alternative viewpoints at a time when there were lots around.

The New Zealand Herald publishers had said in a statement: “The policy of our newspaper here might be ultra-conservative politically, but they give space to the views of radicals, liberals socialists and crackpots.”

“Our papers do,” Ian Cross responded.

“But just how much space is down to the intelligence, hard work and political knowledge of our radicals, liberals, socialists and crackpots. The game is stacked against an opposition or minority groups,” he added.

At The Listener Ian Cross aired similar concerns about news and broadcasting.

“Television has brought the strong influence of show business to news, to the detriment of the social purpose which should imbue its dissemination,” he wrote in an editorial in March 1976.

“Skilled publicists and manipulators of events also make people wary and vaguely mistrustful of what is offered to them by the media. But while all that and more may be admitted, much criticism is not justified,” he added.

Not long after writing that he was put in charge of both TV and public radio as chair and chief executive of the New Zealand Broadcasting Corporation.

He oversaw the creation of TVNZ out of TV One and second channel South Pacific TV (later TV2).

When that controversial move was imminent, he said the amount of media angst about broadcasting was out of proportion to its importance – but symbolic.

“It’s become to our society what the nervous system is to an individual. Right now broadcasting is reflecting doubts, fears and problem after problem (in society). Perhaps the attention is being directed not at those problems but at the medium which is confronting us with those problems,” Ian Cross told Radio New Zealand programme Meet the Media in 1979 .

His hope was to end competition between two state-owned TV channels and carve off one as as non-commercial public broadcaster.

He didn’t get the latter under the Muldoon government and he didn’t survive the change of the fourth Labour government in 1984.

Incoming PM David Lange said Ian Cross would “find it convenient to to resign” – and he did the following year.

“My single greatest lesson of my time is that broadcasting does best when it is left alone . . . free of outside influences on how it should be conducted – mainly political,” he told RNZ’s Morning Report in 1985.

Once out of broadcasting, Ian Cross became a big critic of New Zealand television.

In one of his Media Watch columns in Wellington’s Evening Post in 1989 he wrote of a “cultural disease” infecting TVNZ and complained that cuts left it unable to cover national news properly, especially in the South Island.

“Looking back I created a Frankenstein’s monster,” he told the New Zealand Herald In January 2000.

“Television is the most pervasive and democratic medium in any country. Every western country has a non-commercial television service. We haven’t.”

In a tribute to Ian Cross published last week, Finlay MacDonald – who followed in his footsteps more than 20 years later as a Listener editor – said when you live to almost 94 as Ian Cross did, you outlive some of your dreams and ideas.

But he said Ian Cross also succeeded in championing a confident, inclusive national culture – and also in being part of it.

Last week the Sunday Star Times ran an article asking the question: Is the New Zealand media eco-friendly? It was more an environmental stock-take of the media businesses themselves than an analysis of their editorial commitment to reporting the environment. We learned that Stuff uses vegetable-based ink, RNZ has a sustainability working group, Mediaworks aims […]

Instagram bullies are soon going to be asked to consider what they’re saying before they post. Photo: 123rf In a blog post, head of Instagram Adam Mosseri announced it is rolling out two features to tackle cyber bullying by restricting interaction with bullies. Social media platforms have predominantly monitored posted content and allowed users to […]

Sexual abuse survivor Louise Nicholas is demanding an apology from the Otago Daily Times and its cartoonist Garrick Tremain after revelations he made light of her rape case. First Up was alerted to the 3 February 2004 cartoon by former employee Amy* who said acting editor at the time, Barry Stewart, laughed at her 15 years […]