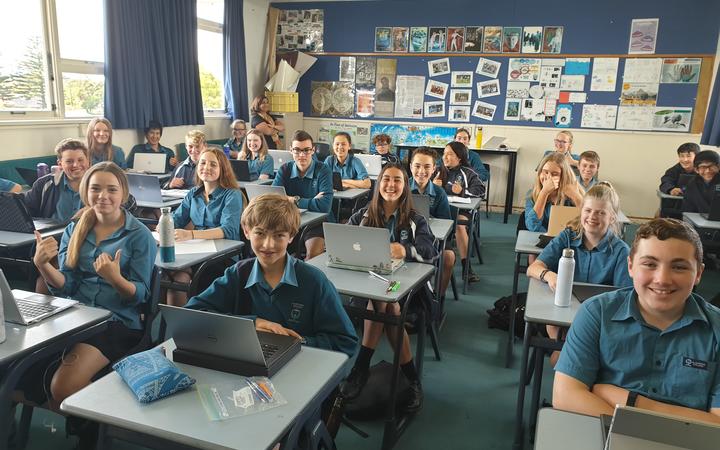 Students at an Auckland secondary school are rediscovering the joy of card games, lunch time play and the simple art of conversation thanks to a total ban on phones during the school day.

Year 9 students at Glendowie College, one of the latest schools to restrict student use of mobile phones.
Photo: RNZ / John Gerritsen

Glendowie College is one of the latest schools to restrict student use of phones and a few weeks into the ban, students appeared divided over the new rules.

“I’ve already got my phone taken off me twice,” Year 9 student Tatum said after describing the ban as “horrible”.

“The idea is good so people can socialise, but I’m not too sure that is helping,” said another Year 9 student, Anthony.

Others were more positive.

“I’ve gotten to know my friends a lot better,” Georgia, also in Year 9, said. “Some of them would play on their phones all morning tea and all lunch and I didn’t learn much about them.”

“We take cards to school now,” said another student, Grace.

The head of health and physical education at Glendowie College, Dave Storrie, said he had noticed that students had become a lot less active during their breaks in recent years.

“They seemed to be a lot more passive, constantly passive, and that was day in, day out,” he said.

“We used to give out a whole bunch of gear at lunchtime and that gradually declined over time.”

Mr Storrie said that had changed since the phone ban started.

“Now we have a whole bunch of students coming to us [saying] ‘can we get a ball, can we get a netball, a volleyball’, students on the courts, students using the gym more regularly, actively just in non-organised games, just playing games outside, a lot more active, which is great from our perspective,” he said.

Glendowie College principal Richard Dykes said prior to the rule about half of the school’s students were on their phones during lunchtime and the ban was aimed at simply giving them a break from their devices.

Mr Dykes said phones contributed to anxiety among students and some had told teachers that they found their phones addictive.

“The reality is that our students are on these pretty much 24/7 and we just said ‘how about you just take a break’. They are not bad, we all have one, they’re brilliant to use, but give yourself some space and talk to that person beside you.”

Canterbury and West Coast Secondary Principals Association president Phil Holstein said he had been tracking international and national trends and there was definitely a move to greater restriction on phone use in schools.

“There seems to be real wave of restricting cellphone use among our students while at school. There’s various points of continuum, complete country bans, state bans, and certain schools are starting to do more and more. So we’re all starting to work out what is best in our schools and in our communities,” he said.

Mr Holstein said his own school, Burnside High, introduced a rule this year that students must put their phones on silent and in their bags during class time.

He said it made it simpler for students to understand when they could and could not use their phones.

“We recognise cellphone use does affect concentration, can be distracting, and also allows other issues to arise particularly around online abuse and such,” he said.

Albany Senior High School principal Claire Amos had noticed an increase in schools trying to regulate phone-use in the past six months.

She said ensuring students were not distracted by their phones was challenging, but she preferred to encourage sensible use by students rather than banning devices altogether.

“In the first instance I would rather trust the young person to use their phone responsibly,” she said.

“I look at the cell phone ban as the equivalent of a chasity pledge. We can all say ‘young people stop having sex’ and the reality is we know that’s not going to be the case. I would much rather that we’re actually educating young people to make safe and sensible decisions and that’s the same with technology,” she said.

Ms Amos said she also disagreed with total bans because some students might not have wifi at home, so school was the one place where they could connect with the internet, and others relied on their phones for social connection.

“That’s why I come back to that concept that we have to be really careful that we are not seeking simple solutions to a complex problem,” she said.

Ms Amos said she supported switching off the school wifi now and then to encourage more play but it was up to teachers to ensure that students were not being distracted by their phones in class.

“I stand by the fact that the teacher is still the teacher and if the cell phone use is a problem and they’re getting distracted by it, that teacher has every right to tell them to put it in the bag.”

NZME puts a price on its paywall for ‘very best’ content

The New Zealand Herald‘s publisher NZME has announced digital subscriptions will be available from next week. Online readers will have to pay $5 a week for everything the Herald has to offer. It’s the most significant move in the market for online subscriptions in New Zealand so far.  NZME signage Photo: RNZ / Calvin Samuel […]

The government still expects to deliver the entire $38 million boost in funding for public broadcasting promised by Labour prior to the election, the Broadcasting Minister says. Minister for Broadcasting, Clare Curran answers questions from journalists Photo: VNP / Phil Smith This week’s Budget announced just $15m and it has not yet been decided how […]

Amazon Prime’s announcement of a Lord of the Rings TV series to be made here was big news in the media – as was the huge tax break it is likely to get. It’s part of a business model that means Amazon paid no tax on $18 billion profits in the US last year – […]